HUNT: Beyond the Frozen Fire 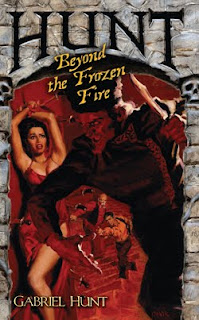 Gabriel Hunt is a new cycle of pulp paperbacks created by Charles Ardai, editor of the Hard Case Crime series. It is aimed at reviving the “two-fisted” genre of men’s adventure tales.

The gimmick of the series is that the hero's name appears on the cover of each book as though he were the chronicler of his own extravagant exploits. It is only on the title page that the name of the true author appears; "as told to ...". As the stories are narrated in the third person, this "ghost-writer" concept isn't exactly followed through, but it does give the books a very distinct brand identity, aided and abetted by the classic pulp artwork of Glen Orbik. It is clearly hoped that Hunt himself will become a strong enough draw to sell succeeding volumes.

It didn't really work that way for me however, as I purchased this novel primarily because it was penned by Hard Case's first female writer, Christa Faust, who shot to fame with the noir thriller Money Shot, in which she grippingly explored the nastier reaches of the porn industry. Beyond the Frozen Fire is a far lighter piece of work which shows another dimension of her talents.
Something of a cross between Indiana Jones and James Bond, Gabriel Hunt is the sort of fantasy figure most men would secretly love to be, and most heterosexual women would like to get more closely acquainted with. Backed by the multi-million dollar resources of the Hunt Foundation, administered by his younger brother Michael, he has the onerous job of roving the world in search of missing ancient artefacts, an activity which necessarily seems to involve sexual entanglements with a wide variety of alluring and dangerous women. 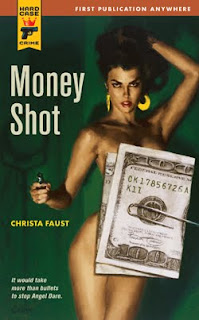 I haven't read any of its predecessors, but my guess is that Beyond the Frozen Fire raises the bar in terms of exotic locales and outré happenings. To set the scene, it kicks off with a short adventure set in Eastern Europe, in which Hunt seeks to retrieve a priceless Cossack knife from a beautiful but treacherous female archaeologist. This short story within a novel is all that is needed to introduce the protagonist to newbies like myself and gets things off to a rollicking start.

The story proper is set off by the arrival on the scene of "a tall, auburn-haired beauty" who introduces herself as one Velda Silver. She is the daughter of a distinguished scientist who has disappeared under mysterious circumstances from a research station at the South Pole. Hunt quickly agrees to help her find her missing father and sets about assembling an expedition.
One of Ms. Faust's talents is the creation of interesting supporting characters and this is given full reign here. Sexual tension is introduced by the inclusion of one of Hunt's old flames, a tomboyish Brazilian mechanic named Rue Aparecido. It doesn't take long, however, for a liaison with the passionate Velda to take place; "her fierce, urgent heat threatening to melt through the polar ice beneath them." 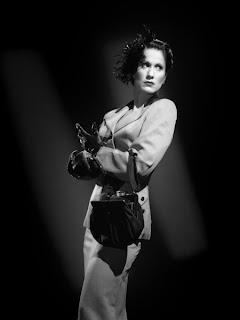 It would be unfair to divulge too much of the ensuing plot, which is pure pulp hokum of the very best kind. Suffice to say it revolves around a “hollow earth” encounter with a lost tribe of Aryan Amazons. Close shaves and finger’s breadth escapes abound, including one memorable incident in which Hunt finds himself tied up by the Queen of the Amazons in a manner that is perhaps not surprising from a writer who lists “rope bondage” among her personal interests!

All this well-paced action is spiced with lashings of innuendo and lively banter between the characters. There is absolutely no pretence at profundity and the novel aspires to be nothing more than a light-hearted piece of entertainment. As such, it is ideal escapist reading for these troubled times, and one can only hope that Charles Ardai’s hope of sparking a pulp revival comes to fruition.
The only criticism I could make concerns the cover, which illustrates the East European prequel. I am a great admirer of Glen Orbik’s work, but this is a bit disappointing. The foreground figure seems too dark and takes up too much space for my liking, and the perspective is very confusing. Above all, it would have been nice to have a de 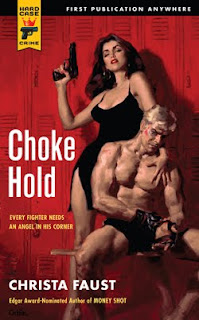 piction of the blonde woman warriors who figure so large in the story (“dressed, if you can call it that, in scraps of black-and-tan-striped fur …”). However, it seems that Ardai’s modus operandi was to have Orbik produce the pictures first, and then distribute them to the authors for inspiration.
I shall certainly be seeking out more episodes of Gabriel Hunt's adventures. What seems most promising is that the individual writers are allowed to keep their own voice; Beyond the Frozen Fire is unmistakably a Christa Faust novel, no matter what name is written on the front.

A further Faustian treat is due early next year with Choke Hold, in which Angel Dare, the superbly characterised ex-porn star heroine of Money Shot, returns for another stab at society’s dark underbelly. Sporting a gorgeous Orbik cover, this is bound to sell in stacks. With a movie of Money Shot also in preparation, things seem to be on the up and up for the writer dubbed by Richard Prather “the ‘First Lady’ of Hard Case Crime”.
Posted by Antony Trepniak at 06:03