From Pan's People to Pony Play:"Ringstones" 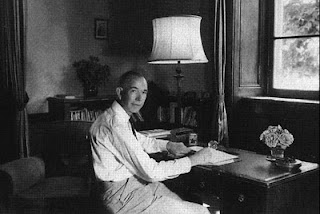 John William Wall (1910-1989), who wrote under the name of "Sarban", has had something of a renaissance of late. This is largely due to the stalwart efforts of the Tartarus Press in publishing high-quality hardback and e-book editions of his long-out-of-print and unpublished works, plus a biography by Mark Valentine. Unfortunately, however, I have had to rely on a typo-riddled P.O.D. edition of The Sarban Omnibus. Two of the the three novels contained therein (Ringstones, The Sound of his Horn and The Doll Maker) are also available in free online editions.

Ringstones (1951) is centred on the first-person narrative of Daphne Hazel, a trainee gym teacher who accepts a holiday job at Ringstones Hall from an eccentric academic named Dr Ravelin. At this isolated moorland residence she is tasked with tutoring three mysterious "foreign" children of undisclosed nationality. In response to her questioning, 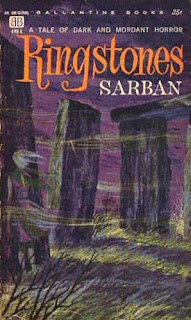 Dr Ravelin is decidedly unforthcoming about the origin of his mysterious charges.

Idyllic to start with, the tale gradually becomes sinister as Miss Hazel discovers more about her mysterious charges and their surroundings. It becomes apparent that she is entrapped by the power of Nuaman, the fifteen year old boy (or is he?) who also dominates his younger female peers, Marvan and Ianthe, and Katia the Polish maid. Eventually, she is vouchsafed a disturbing revelation of where this domination is leading.

These events are punctuated by conversations with the reclusive Dr. Ravelin, who stays cloistered in his study for most of the daytime. An amateur archaeologist, he speculates that the ancient house occupies the site of a Roman arena set out for chariot races and other games. The moorland stone circle from which the Hall takes its name feeds wilder ruminations on history and mythology. Reflecting on the reuse of sacred sites by successive religions, Ravelin concludes "Perhaps these ancient stones hold down something far more ancient, something far stranger than the men who placed them understood. Some queer feet have danced here, I feel."
Ringstones is suffused by the spirit of Pan and "his representatives on (the) moors", who may or may not be the indigenous inhabitants of the land, driven out to desolate places but still recalled by folklore and superstition. The myth is of "the gift of the fairies" which, as Dr Ravelin observes "always has some disastrous condition attached to it. Their gold, in the morning, is a stone, or their invitation to a night's revels holds the unfortunate mortal in a century's slavery."

It will be clear from the above that we are in Arthur Machen territory. As with many of the Welsh master's accounts of the" Little People" Sarban's tale exudes an air of unwholesome sensuality. It starts off with in "Health and Efficiency" style with the well-toned Miss Hazel donning her "skimpy gym trunks" for a day's "romping and tumbling" with her shirtless young charge, whilst wondering at "the perfection of his physical development". Likewise, the clothing of the two little girls is of a type unlikely to be approved by the Mother's Union; "Like Nuaman's, their dress seemed more than is usual with English children to set off their figures rather than to cover them".

Lest anyone get the wrong idea, no explicitly carnal sentiments are expressed in the novel; things remain chaste even when Nuaman "caressingly" strokes Miss Hazel's arm in a "soothing, persuasive way". Sarban's eroticism runs underground and is focussed on male control and dominance. The measures that Nuaman (jokingly nicknamed "the Slave Driver" by his tutor) takes to impose his will on females very slowly become apparent, until the point at which Miss Hazel realises she has misheard the Polish maid Katia's broken English as "he weep" and that what she really meant was "he whips".

Miss Hazel also starts to realise that it is physically impossible for her to leave Ringstones. An attempt to reach a nearby village by crossing the moors results in her becoming lost and going around in circles until she returns to the Hall ("I want to keep you here for ever" observes Nuaman in a later conversation). She also receives a creepy indication that the two girls may be representatives of a larger group on the moors, as she spots some of them playing with Nuaman by the stream. Meanwhile, the Polish maid expresses her fear of lies-schi, which Dr Ravelin explains to the means "demons of the forest".

The conclusion of Miss Hazel's retelling of her adventures finds her arising on a moonlit night and finding herself mysteriously cast back in time to the Roman era, when the Games are being held on the site of Ringstones Hall. Preparations for track events are taking place in the arena and she encounters the Armenian servant Sarkissian with a special chariot. She had previously dreamt of him constructing this device with Nuaman in the stables. 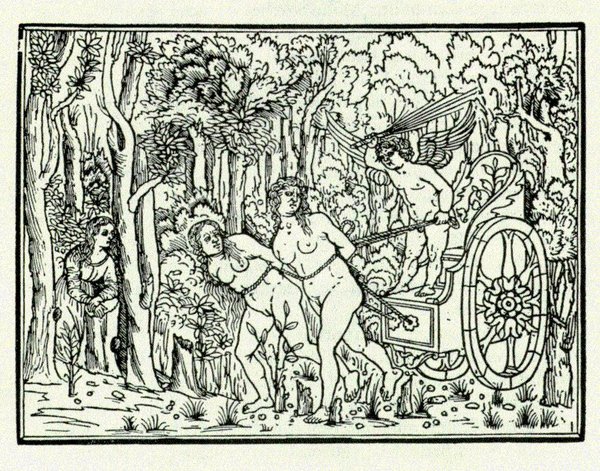 It appears that Miss Hazel is about to be forced into an unconsenting act of what is termed "pony play" by modern devotees of the Aristotelian Perversion. Already leashed, she is to be stripped and manacled to the pole of this vehicle alongside the already-harnessed Katia in order to take part in a race. Then she sees the charioteer; "Nuaman gazed at me, and before I dropped my eyes I saw his expression begin to change… I dared not look at his face, but I saw the lash…" On this climactic note, her memoir comes to an end.

Daphne Hazel's story is framed by the sceptical account of an unnamed male narrator accompanying his friend Piers, who has received her manuscript and is keen to discover more about the extraordinary events described in it. When they arrive at Ringstones Hall, they discover it to be an uninhabited ruin. Tracking down Miss Hazel (placed as a tutor to two Egyptian girls in more normal accommodation), she explains her story to them as "a sort of dream, or a lot of dreams" which came to her after she injured herself at the ruin and was left there alone for several hours whilst medical assistance was sought for her.

One is reminded of the gift of the fairies, but the young woman seems, superficially at least, undamaged by her experiences, imagined or otherwise. Just before the narrator and his friend part company with her, they observe her making a movement which shows this is not the case;
"She held out both her hands … with a curious gesture of surrender as if offering the hands and wrists to someone. I saw a newly-healed long cut on the inside of her left wrist plain against the sun-browned skin. She seemed to offer her wrists a moment and then, yielding to an unknown compulsion, reluctantly turned down her palms, curling her fingers round som 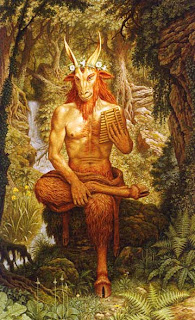 ething invisible to us."
Our narrator concludes "I was shocked to see how far behind Piers I had been in understanding the depth of her distress … I think we were all looking with a slowly rising fear at those two drooping hands, so helplessly waiting there." They respond in a reassuring way, but it seems clear that both believe that Pan's representatives have found a victim.

It could be argued that the extent to which Sarban's fantasy edges over into pornography is a measure of how it fails as literature. It could be that Sarban got away with so much kinkiness because he was writing in a more innocent time. Reaching the end of Ringstones, modern readers may feel that they have stumbled into one of John Norman's notorious Gor novels.

Seen as a trilogy, the component novels of The Sarban Omnibus share the theme of male dominance. Ringstones introduces it as an archetypal principle arising from the mythic depths of the collective unconscious to ensnare a modern, independent young woman. The message is that, despite her superficial recovery, Daphne Hazel will remain permanently marked, physically and mentally, by her mysterious experiences. "Everything has end. Except a circle" she pleads to "Sir No Man" at one point. "Ringstones is a circle", he responds "You can never come to the end of Ringstones"…
(Next: The Sound Of His Horn)
Posted by Antony Trepniak at 11:18

Even your well-crafted synopsis is cumulatively sinister! I wonder if this story partly inspired Nigel Kneale's 'The Stone Tape'? The central theme of the latter clearly reflects some elements of 'Ringstones'. Of course, this could just be convergence of ideas (Kneale would I suspect have been unlikely to admit of so direct an influence!). Great stuff, anyway, I must seek out Sarban...