‘The Witches’ by Peter Curtis

The Witches (1966) is one of Hammer’s lesser-known productions.  Lacking the Gothic trappings most commonly associated with the studio’s horror output, it was designed as a star vehicle for Joan Fontaine (an Oscar-winner for her performance in Hitchcock's Rebecca over a quarter of a century earlier), who had acquired the rights to film a novel called The Devil’s Own by Peter Curtis, a pseudonym employed by bestselling historical novelist Norah Lofts.

The movie, scripted by Nigel Kneale and based around the survival of a Satanic witch-cult in a contemporary English village, is chiefly of interest as a precursor of (and apparent influence on) The Wicker Man.  In its best moments it conveys an air of creepy menace and growing paranoia although it fails to maintain the terrifying tone of classics such as the The Wicker Man and Blood on Satan’s Claw.  Joan Fontaine, as its middle-aged head-mistress heroine Miss Mayfield, bears an unfortunate resemblance to one Margaret Hilda Thatcher and is arguably upstaged by an outrageously camp performance from supporting actress Kay Walsh as high priestess of the coven.  The final, stylised Black Mass / orgy scene rapidly descends into unintentional hilarity, like some piece of experimental art-theatre improvised by over-zealous GCSE drama students.

The Devil’s Own has been reissued in paperback as The Witches by the renascent Hammer, as part of a series of movie tie-ins and novelisations (it has also previously appeared as The Little Wax Doll under Norah Lofts’ own name).  Unfortunately, Hammer has chosen to saddle the book with an embarrassing generic cover which bears no relationship to its contents and is evidently designed to mislead fans of Twilight and similar 'young adult' sagas.  Anyone seeking ‘supernatural romance’ in The Witches is in for a cruel disappointment; a more sexless tale could not be imagined; the novel, first published in 1960 and set in 1959, is a relic of an era in which an unmarried woman in her forties had to accept that she was a hopeless ‘spinster’ and destined for a solitary life.  The compensation was that she was allowed to pursue a career; hence Miss Mayfield’s willingness to take on the role of headmistress at the remote East Anglian village of Walwyck.

Miss Mayfield is a quietly idealistic character who has not long returned from a twenty year stint teaching at a mission school in Africa.  She wishes to escape from the drudgery and squalor of working at her most recent appointment in an inner-city school and living in ‘digs’ with another woman teacher.  As the story progresses, we learn that she has survived an unspecified mental breakdown in Africa which led to her return to England.   Apart from a chilling reference to ‘the Mau Mau oath’ (colonial ethnopsychiatry held Kenya’s Mau Mau rebels to be ‘an irrational force of evil, dominated by bestial impulses and influenced by world communism’, which aided the killing of more than 20,000 of them and the torturing of suspects by the British) much less is made in the novel of African voodoo than in the film.  In his newly commissioned introduction, Cyril Franke, the film’s director, proudly refers to his ‘production of Man of Africa and first-hand experience of witchcraft among the natives’.  It therefore seems likely that Franke was responsible for emphasising this element, which is crudely-presented and adds nothing to the film apart from an unpleasant and unnecessary injection of racism.

Another difference to is that Canon Thorby (Bax in the film), who runs the private school to which Miss Mayfield is appointed, is a genuine cleric, rather than an eccentric imposter.  Unlike the ruin depicted in the film - so reminiscent of The Wicker Man - the village church is intact and still functioning as a site of Christian worship (alongside the occasional Black Mass).  Thorby’s sister Isabel is eventually revealed to be the coven leader; could it be that Hammer shied away from depicting a churchman so closely implicated in Satanism, for fear of censorship from the BBFC?  The Canon and his sister are much more boring characters in the novel, with the latter hardly seen until the climax.

Much of the novel runs the same as the film, with the addition of extra characters and a number of pointless plot digressions.  After Miss Mayfield becomes suspicious that a death in the village has been caused by witchcraft and vows to reveal all at the inquest, she bangs her head on a desk in a mysterious ‘accident’ and conveniently (and unconvincingly) loses her memory.  This leads to her being parcelled off for a rest cure at a Fawltyesque boarding house in Hove, inhabited by bridge-playing old ladies and a retired General with their attendant nurses (there's not much fun to be had for the Twilight crowd here!)  Eventually she escapes back to Walwyck and regains her memory just in time to rescue Ethel, a teenage girl who, Rowan Morrison-style, has been secreted away prior to being the focus of Walwyck’s ‘All Hallowse’en’ sabbat which is to take place in the church itself.

The fate that has been planned for Ethel – defilement at the hands of a pantomime-clad ravisher - is much less horrific than the Ed Gein / Elizabeth Bathory gruesomenesss threatened in the movie, during the nastiest moment of which we observe the village butcher, who has already been graphically shown skinning a rabbit, whetting his knives in readiness.  This was possibly not expected to be the case in the minds of Ms Lofts’ genteel lady readers; any suggestion of nakedness or sexuality is couched in terms of the utmost horror and repulsion.  As she hides in the church, the mere sight of the villagers’ uncovered bodies at the start of their ritual causes Miss Mayfield so much distress that she is forced to pretend to herself she ‘is back home, in bed’, rather than face up to ‘the fat round haunches… the pendulous breasts like empty paper bags…’ paraded in front of her.  This scene is prefaced by a jaw-dropping reflection about her time in Africa; ‘she had time to think that black skin was, in itself, in some strange way, a kind of raiment; no black-skinned people could look as naked as these Walwykians did.’

The film suffers from a preposterous conclusion in which Miss Mayfield is finally invited along to the human sacrifice by Thorby's sister for no apparent reason and then manages to sabotage the proceedings via supernatural means. By way of contrast, the novel’s ending is plausible enough but dull.  Besieged in the church tower with the hypnotised girl, Miss Mayfield finally realises that ’she was, in a fashion, the victim of her own faith’ and that the witches are without any supernatural capabilities; ‘if they had any power other than their own, they wouldn’t throw themselves against the door.’  Miss Mayfield saves Ethel by human means, Isabel Thorby bangs her head against the font and dies and, in a final ‘twist’, the girl destroys out of modesty the cine film that her rescuer has made of the ritual so that no record remains of Walwyck’s lurid Satanic revels.

The Witches, with its unquestioning depiction of post-war attitudes and morals, is a snapshot out of time. Although its premise is a promising one, the story is poorly paced and offers little of interest by way of characterisation.  It might have been rendered more interesting had the heroine been less strait-laced and old maid-like (the word 'dowdy' is used to describe her appearance throughout).  A frisson of attraction between her and the Canon would have offered an additional pole of interest; instead all we have is her fending off the attentions of a mildly louche, elderly wine-dealer in a purposeless distraction to the main story. 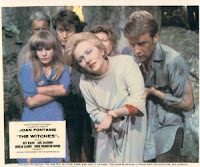 As we have seen, The Witches doesn’t really count as supernatural fiction, although Ms Lofts was not averse to including spooky passages in her 'modern gothic' novels such as Gad's Hall (1977) and even published an entire collection of ghost stories; Hauntings (1974).  Written prior to the mainstreaming of Wicca and modern paganism, the story’s depiction of witchcraft comes straight from the pages of Malleus Maleficarum, although in Miss Mayfield’s sensibly modern, rationalistic brand of Christianity, witchcraft is seen as an atavistic survival rather than an active force of evil and most of its adherents are to be pitied rather than condemned:
‘And she remembered a phrase… “God has no hand but man’s to work with.”  It was equally true of the Devil.  Everything else – black magic, white magic, miracles, answered prayers – they were left-overs, dregs, the vestigial remains of primitive man’s bewildered recognition of things beyond his control.’

So what can have inspired such a tale?  In the mid-1950s, witchcraft and murder had been linked in the public mind with the publication of Detective-Superintendent Robert Fabian’s sensational memoirs Fabian of the Yard (1955).  In these, he offered a grippingly embellished account of an unsolved murder that had taken place in 1945.  In a case which became known as ‘the Lower Quinton Witchcraft Murder’ an elderly Warwickshire farmworker named Charles Walton was found savagely slain in a manner described by Fabian as ‘like the kind of killing the Druids might have done in ghastly ceremony at full moon’.  Alternatively, the manner of Walton’s death, pinned to the ground by a pitchfork through the chest and slashed across the throat with a billhook, closely resembled the 19th Century execution of a suspected witch by a mentally deranged young man in the same area.  Fabian found his investigations blocked by obstructive villagers and reported an eerie encounter with a ‘Big Black Dog’ that related to local legendry involving Walton.  He secretly concluded that the murder was committed by a farmer with a financial motive (he could not record this while the suspect still lived due to libel laws) but the idea of a present-day hideous crime linked to the survival of ancient beliefs in a backward rural community is a powerful one that may well have provided an impetus for The Witches. 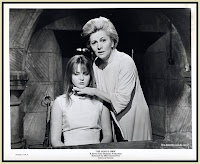 It is on record that Nigel Kneale’s original screenplay included elements of humour that the producers rejected.  It is easy to see why he would wish to satirise this material and the completed film retains camp elements that are absent from the novel.  It is impossible not to snigger, for example, at the prurience with which Ms Lofts alludes to a bodily act which she is primly unwilling to describe yet nonetheless invites us to guess at and imagine:


‘Then she lifted the cup, and saying, “Here is his blood,” offered it to Granny Rigby, who did with it something so degrading that Miss Mayfield shut her eyes and released her finger’s pressure on the camera, hoping that she had been in time.  Not even for purposes of evidence did she want a picture of that!’

So - who is going to enjoy this book?  Well, no one who is attracted by the cover, that seems certain.  Its appeal will mainly be limited to diehard Norah Lofts fans (who will probably have read it already) and Hammer completists. Wicker Man scholars and may also wish to check out both the book and the film.  For myself, I am always intrigued to read the book that inspired a film I have enjoyed and The Witches was a thought-provoking, if somewhat dull, read 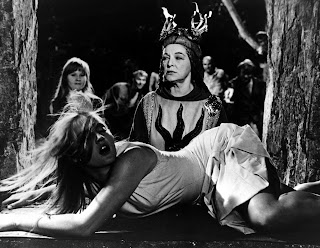 Posted by Antony Trepniak at 17:27