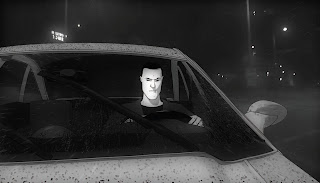 I came across this dvd in the bargain bin at Morrisons. From the title and the description on the box, I was expecting a full-on animated tribute to the whole film noir genre. However, this isn't really what the movie's trying to do, although it does contain enough noir elements to get away with the title. Purists will find plenty to carp about, as the modern setting alone will be enough to alienate those who believe that a true film noir must be set in the 1940s and 1950s. Others will consider that the filmmakers have succeeded in their aim of creating a solid low budget 'B' movie which draws inspiration from the past. From its black and white format to its plot and characterisation, “Film Noir” lives up to its name, although it also has roots in the action movie genre. Although the two genres are not necessarily incompatible, the action movie aspect takes over at times and ruins the noir atmosphere that is really the movie’s greatest strength.

Animation-wise, “Film Noir” was never going to give “Sin City” a run for its money, but the work of its Belgrade-based crew is sufficient to carry the plot and convey a distinctive image. 2D style figures are superimposed on more realistic backgrounds, many of which were filmed on site in L.A., a semi-ironic nod to the back-projections often used in 1940s and 1950s movies during car scenes. As may be expected, rain pours down windscreens as cars speed down the long lonely freeways and it is generally night-time with neon signs flashing. Considering that they are drawings, the shady and troubled women who throw themselves at the hero / anti-hero at every opportunity are surprisingly hot and there are several sleazy sex scenes. Overall, however, you never stop being conscious of watching an animation, and the low-budget effects ofte 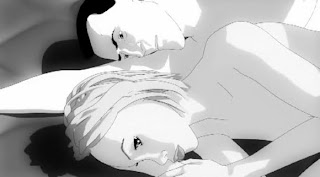 n give a game-like impression, especially when there are crashing vehicles and explosions.

The unlikely plot is equally cartoon-like and, in fact, probably wouldn’t work in a live-action movie. The theme is self-discovery, as an amnesiac man who finds himself regaining consciousness next to a murdered policeman beneath the famous Hollywood sign tries to piece together his past. The more he finds out, the less he likes himself, although twists abound in a manner I won’t disclose here. Identity appears to be a big issue for the movie’s L.A. based Serbian director, who uses the one-off pseudonym of “D. Jud Jones” for the project and claims to reject the concept of a career. In true noir style, most of the characters suffer from self-hatred and can be corrupted by money from a sinister “Mr. Big” who represents the cruel and perverted heart of the system.

Throughout the movie, the protagonist is threatened by a deadly gang of assassins who turn up unexpectedly in a machine-gun blazing helicopter. In most cases, no explanation is given as to how they know his whereabouts or which vehicle he is travelling in. I found myself wishing that more imagination had been applied to these attacks – perhaps a more traditionally noir mode of transport such as a train or a boat journey could have been incorporated into the story? It is at these points that the film seems to los 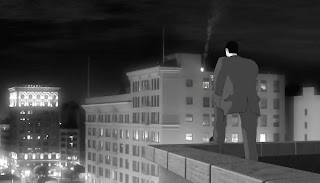 Just as many of the original directors who crafted the classic films noir of the 1940s and 1950s had arrived as refugees from Nazi Germany to present an outsider’s view of the States, the creative team behind “Film Noir” comes from part of Europe with a difficult recent history; the former Yugoslavia, with production taking place via the Internet between L.A. and Belgrade. The key difference is, of course, that the original film noir was a genre invented in retrospect by French critics and intellectuals who detected stylistic and thematic similarities in many of the Hollywood products of the time and came up with the theory to explain this. Modern noir (“neo-noir”), by way of contrast, is a self-conscious attempt to replicate these elements in a contemporary setting. The impetus behind “Film Noir” is a playful one, with the director attempting to employ available resources, including a spare team of animators and some pre-existing plot ideas, to an entertaining effect. (In the interview included as an extra on the dvd, he explains that he had never even thought about making an animation until he learnt about the team of former animators employed by one of his friends in a web-design business left high and d 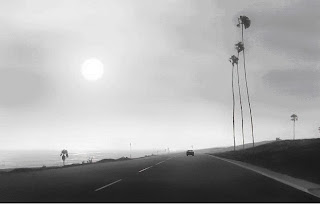 ry by the Internet bubble).

One of the best things about movie is its score, composed by the multi-talented Mark Keller, who also voices the main character. Jazz-based, it also features a couple of excellent song compositions that are soul / blues pastiches and show Mr. Keller to have a voice comparable to Tom Waits’. (It is interesting to note, by the way, how few of the original films noir actually had jazz soundtracks, whereas the sound of a sleazy sax has become de rigueur in neo-noir.)

So overall, “Film Noir” is definitely worth a peak, as indeed are the bargain bins at Morrisons (my finest-ever haul from which was Stuart Gordon’s sublime Lovecraft adaptation "Dagon").
Posted by Antony Trepniak at 08:03 No comments: