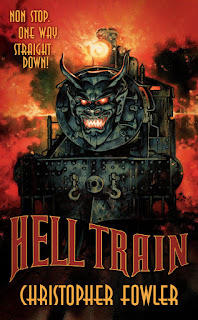 Hammer horror, the romance of travelling by steam train; what can possibly go wrong?

Well, quite a lot, it seems. Despite the framing device, in which an American screenwriter pitches it to Michael Carreras, Hell Train's main story just doesn't bear much resemblance to a Hammer film (although it does borrow elements from Horror Express, which many people seem to think is a Hammer film). Considering the ending, it could be argued that this is part of the joke, but all it does in reality is render the Hammer link gratuitous. A cynical person (not me, of course...) might even view it as a blatant attempt to cash in on the reborn studio's resurgent popularity.

The story, taken by itself, is an acceptable piece of pulp, but it's easy to see why Fowler should want to "distance" himself from it - another reason for the framing sections.  He clearly, for instance, hasn't bothered to find out anything about trains; how is it for instance, that passengers manage to get from the train on to the footplate of the locomotive (annoyingly called the "engine room") when it's moving?   The Americanisms are irritating; I know the story-within-a-story's supposed to have been written by an American, but the author doesn't even know the meaning of at least one of the words. On p.229, one of the characters, "in the engine room", watches the "stoker" whilst "trapped against the caboose" (i.e. the brake van - famously found right at the back of an American freight train)!

The characters are stock ones and don't interact in a particularly interesting way. They are all given their own separate little story, leading some reviewers to compare the plot to a that of a portmanteau horror film such as Doctor Terror's House of Horrors , but those were made by Amicus; nothing to do with Hammer. The idea of each person being "tested"by the train itself for some moral flaw in their character is rather boring. It would have been much more interesting to see their characters develop as they responded to a mutual threat together. So far as the monsters are concerned, there are way too many zombies (oh, how bored I am with zombies!), once again decidedly un-Hammerlike as the studio only ever made one zombie movie in its huge output.

I  quite enjoyed the framing sections which convey the "feel" of Hammer reasonably well, although there are a couple of sloppy mistakes. Nigel Hawthorne was never in a Hammer film and Ingrid Pitt didn't join the roster until 1971. Also - I can't imagine a writer who had previously worked for the notoriously miserly Roger Corman making the mistake of turning out a script that would go over budget for Hammer.  Overall, there is so much more could have been done with the setting of the studio and the wonderful people who worked there.  Fowler employs one of his characters to make observations about the company's declining fortunes and how these related to changes in society; but these do not go beyond the journalistic insights reflected in a work such as Sinclair McKay's A Thing of Unspeakable Horror.

By the time I had got near the end and was introduced to the "bloated" Controller, complete with his stovepipe hat, I started to feel that I really had been taken for a ride and had alighted on the Island of Sodor. At least the Rev. Awdry did his homework properly and was scrupulously correct about railway operations!  I can only assume that this is a deliberate joke, but it is irrelevant and only serves to undermine "suspension of disbelief" at a crucial moment.

Fun, but nothing special, Hell Train is on a level with the type of writing that used to be churned out in industrial quantities by paperback houses such as NEL in the '70s and '80s. As I rarely read much modern horror, could it be that the high praise dished out to this book is a measure of how far the genre has deteriorated since that era?

Full praise however has to be given to Graham Humphreys' gorgeous cover painting. In these days of photoshopped blandness, it is a sheer delight to see work of this standard adorning a paperback. Let's hope it starts a revival of high quality pulp art.
Posted by Antony Trepniak at 16:24 No comments: